Tesla (NASDAQ:TSLA) stock will be added to the S&P 500 later this month, and many investors have been jumping the gone. However, JP Morgan analysts are advising them not to do that. They also raised their price target for Tesla stock, but only to $90. Meanwhile, (Morgan Stanley) analysts explain what the addition of Tesla to the S&P means for other stocks in the index.

JP Morgan analyst Ryan Brinkman said in a note today that he is concerned about how quickly Tesla stock has skyrocketed this year. The shares have added over $500 million to the company's market value. Meanwhile, Tesla's net income for the third quarter was only $337 million.

According to Brinkman, Tesla stock is "in our view and by virtually every conventional metric not only overvalued but dramatically so." He noted that the shares trade at 1,325 times the long-term PE multiple and 291 times the 2020 estimate.

The JP Morgan analyst advises investors not to increase their holdings in Tesla stock to its about 1.44% weight in the S&P 500. The investment bank suggests index-tracking funds will sell $57 billion worth of shares in other companies so they can buy Tesla shares before it enters the index. The stock slumped by about 7% after Brinkman's note, pulling back from record high levels.

What the addition to the index means for the markets

In another note earlier this week, Morgan Stanley strategist Boris Lerner considered the implications of adding Tesla stock to the S&P 500. It's the largest addition in history with about $78 billion in inflows from passive funds. That amounts to about 17% of the company's free float. Tesla will be the eighth largest stock in the index when it is added with a weight of 1.46%.

Lerner expects Tesla shares to remain well bid going into the rebalance, although he believes most of the price appreciation is now in the past. He analyzed previous large additions to the S&P in recent years and found that most of the outperformance related to the rebalance took place in the few days right after the announcement. Stocks that were being added slightly beat the index on the date of the rebalance.

Lerner also said that large additions to the S&P tend to underperform the day right after the announcement. Due to the massive rally in Tesla shares, he wouldn't be surprised to see it move lower after it's added to the index. Lerner also pointed out that Tesla's addition will also impact other large-cap U.S. stocks by reducing their weights in the index to make room. That suggests an outflow of $3.5 billion to $5 billion from Amazon (NASDAQ:AMZN), Apple (NASDAQ:AAPL) and Microsoft (NASDAQ:MSFT). Lerner shared this chart showing the projected changes in weights of the top 20 constituents of the S&P 500. 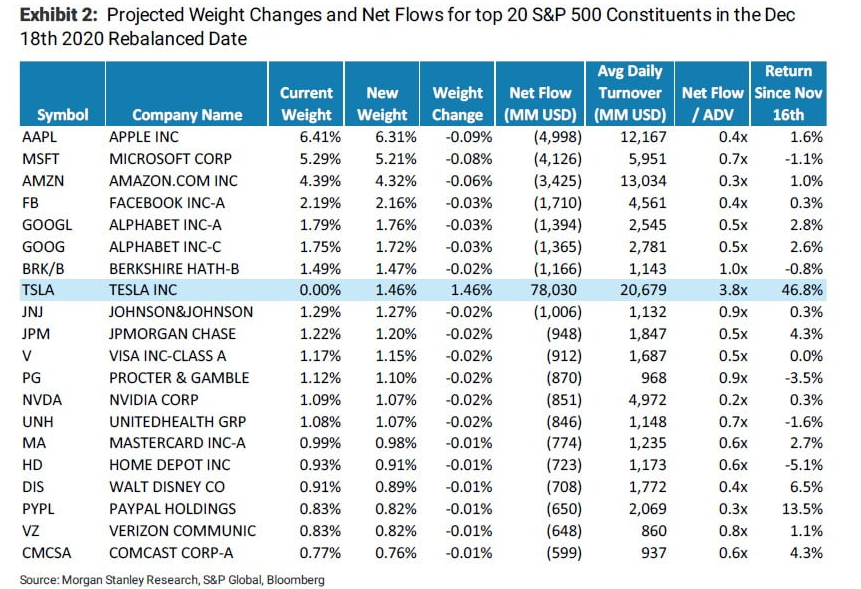