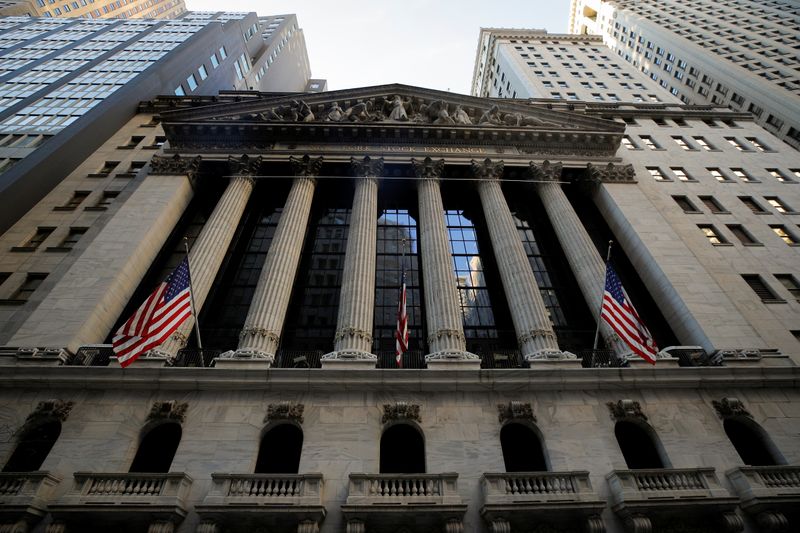 © Reuters. FILE PHOTO: The front facade of the NYSE is ssen in New York

NEW YORK (Reuters) – Wall Street stocks advanced, with the Nasdaq closing at a record high, on Friday in a holiday-shortened week as retailers kicked off the year-end shopping season amid record COVID-19 hospitalizations.

The Nasdaq outperformed as investors favored tech-related, market-leading stocks that have fared well during the pandemic, while economically sensitive cyclical stocks weighed.

All three indexes rose for the week, in which the S&P 500 reached a new closing high and the blue-chip Dow ended above 30,000 for the first time ever.

"It's an abbreviated session and volume is light, so the only conclusion is that the rally is not faltering for now," said Peter Cardillo, chief market economist at Spartan Capital Securities in New York.

"It does bode well for next month," Cardillo added. "Will we see a Santa rally? Most likely. Will it be as robust as November? That's a big question mark."

Retailers opened their doors to Black Friday shoppers, with social distancing practices and other measures put in place to mitigate infection risks, while offering steep discounts.

"Black Friday has been somewhat tarnished – traffic is down due to the pandemic – but the good news is e-commerce sales have reached a new record," Cardillo said. "That's encouraging."

In the latest development on the road toward developing a vaccine against COVID-19, Britain gave drugmaker AstraZeneca (NASDAQ:AZN) the green light after experts raised questions about the vaccine's trial data.

As U.S. hospitalizations for coronavirus set a grim record of more than 89,000, the race for a medical solution to the pandemic has led to promising vaccines from Pfizer Inc (NYSE:PFE), Moderna (NASDAQ:MRNA) Inc and others, fueling optimism for light at the end of the tunnel.

Of the 11 major sectors in the S&P 500, healthcare companies enjoyed the largest percentage gains while energy shares had the biggest percentage loss.

Chipmaker stocks, which have been resilient throughout the global health crisis, once again outperformed the broader market, with the Philadelphia SE Semiconductor index rising 1.2%.

Shares of Walt Disney (NYSE:DIS) Co dipped 1.3% after the company said it would lay off about 32,000 workers, up from the 28,000 announced previously. Jobs will be cut mainly at Disney's theme parks.

Tesla (NASDAQ:TSLA) Inc built on its recent rally, its shares advancing 2.0% even as U.S. regulators opened an investigation into front suspension issues in about 115,000 Tesla vehicles.

Advancing issues outnumbered decliners on the NYSE by a 1.36-to-1 ratio; on Nasdaq, a 1.73-to-1 ratio favored advancers.

Volume on U.S. exchanges was 6.82 billion shares, compared with the 11.03 billion average over the last 20 trading days.