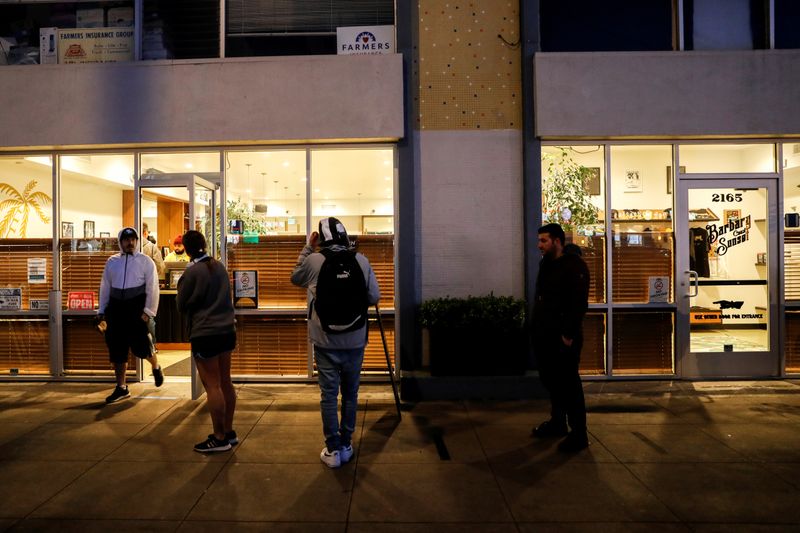 © Reuters. FILE PHOTO: People stand in line outside the Barbary Coast Sunset Cannabis Dispensary prior to the citywide shelter in place order amid the novel coronavirus (COVID-19) outbreak in San Francisco 2/2

(Reuters) – U.S. cannabis sales hit record levels over the Thanksgiving weekend, prompting industry predictions the combination of COVID-19 anxiety and a trend towards legalisation has triggered a permanent uplift in demand.

Though many expected the initial surge to fade, monthly sales have kept hitting records.

One of the top cannabis data aggregator and research companies Akerna (NASDAQ:KERN) said sales on Green Wednesday, as the eve of Thanksgiving is known, climbed by 80% above the daily average this year, hitting an all-time one-day record.

The company's calculations, based on data collected from its partner dispensaries in 19 U.S. states and adjusted to project the full market, show total cannabis sales of around $238 million during the Thanksgiving weekend, nearly 14% above last year.

By keeping people at home, limiting their entertainment options and adding to stress, the pandemic has helped to drive demand for cannabis for much of the year.

Four in 10 users increased their overall consumption and more than half said they turned to cannabis to improve mental health, an advance copy of a report by research firm New Frontier Data, which is to be published next week, showed.

Even if COVID-19 vaccines can bring back a degree of normality, insiders and observers say 2020 is likely to mark a watershed for the cannabis industry, as for many other sectors.

"The shutdowns created a real 'come to Jesus' moment for a lot of stakeholders," Avis Bulbulyan, Chief Executive of cannabis consultancy Siva Enterprises, said. "Consumer acceptance went through the roof."

As a result, operators upgraded their plans and attracted mainstream investors that before showed little interest in the nascent industry.

Further legitimacy came from the decision of state regulators to designate cannabis retailers as "essential business" during lockdowns, and, in the U.S. elections on Nov. 3, initiatives to legalise recreational or medical marijuana, which five states put on the ballot, sailed through.

Thirty-five states allow medical marijuana use, some with restrictions, and 15 states, plus the District of Columbia, have legalised its recreational use.

Opposition persists, however, with some groups saying it causes addiction and that not enough research has been carried out to prove medical benefits.

The states of Idaho and Nebraska have bans in force. Activists in favour of cannabis are seeking a vote to try to overturn them in 2022 mid-term elections.

Stuart Titus, an early cannabis investor and CEO of Medical Marijuana Inc, says 2021 could be the year when cannabis becomes as readily available as alcohol and tobacco.

"Shortly in restaurants, consumers will have the choice of an alcoholic beverage or a cannabis-based beverage," he said.

(Graphic: States that have legalized marijuana in the United States – https://graphics.reuters.com/USA-CANNABIS/jznvnnwwqvl/chart.png)

Marijuana remains illegal under federal law, which has limited the industry's access to banking services and funding.

Vice President-elect Kamala Harris' has promised to change that and decriminalising weed is part of the Democrats' platform.

Industry insiders acknowledge it may take years for any changes to make their way through the legislative process, but shifts in sentiment are moving more quickly.

A Gallup poll in November showed support for marijuana legalisation had reached 68% support, the highest level yet and up from 66% last year.

At the same time, a separate Gallup poll found 70% of U.S. adults consider smoking marijuana to be "morally acceptable," a 5 point rise in a year.

Solid majorities for legalisation in traditionally conservative states, such as North and South Dakota or Missouri, could also help to win over Republican lawmakers and local politicians, Steve Allen, chief executive of Californian producer The Parent Company, said.

"With many Republican Senators now representing states that have passed cannabis legalisation measures by wide margins, we will likely see increased support from Republicans for federal cannabis reforms," he said.

Akerna CEO Jessica Billingsley said her company has received a record number of research requests from state governments, which have lost tax revenues to business closures during the pandemic and are looking for new sources of income.

"Lawmakers see cannabis legalisation as a great way to shore up their balance sheets and provide jobs during this time of economic uncertainty," she told Reuters.

The experience in Canada could yet serve as a cautionary tale.

It became the first major nation to legalise recreational weed in 2018, but industry hopes were dashed by oversupply, black markets and lack of profitability.

Producers and research firms say the United States is better placed to succeed because of the vast size of the potential market, new products and greater awareness of the therapeutic benefits of cannabis.

"What used to be a 'recreational drug' is being better understood to be a complex compound with a long list of potential benefits for both the mind and body," The Parent Company's Allan said.