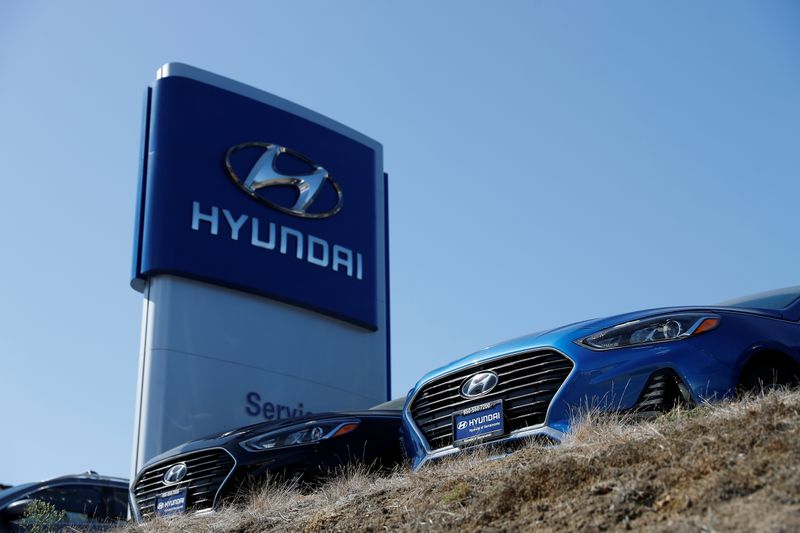 © Reuters. FILE PHOTO: Cars for sale are seen at Hyundai of Serramonte in Colma, California 2/2

The U.S. National Highway Traffic Safety Administration (NHTSA) said the two affiliated Korean automakers agreed to consent orders after it said they had inaccurately reported some information to the agency regarding the recalls.

Hyundai agreed to a total civil penalty of $140 million, including an upfront payment of $54 million, an obligation to spend $40 million on safety performance measures, and an additional $46 million deferred penalty if it does not meet requirements.

"It’s critical that manufacturers appropriately recognize the urgency of their safety recall responsibilities and provide timely and candid information to the agency about all safety issues," said NHTSA Deputy Administrator James Owens.

The settlement covers recalls in 2015 and 2017 for manufacturing issues that could lead to bearing wear and engine failure.

As part of the settlement, Hyundai is investing $40 million to build a safety field test and inspection laboratory in the United States and implementing new IT systems to better analyze safety data.

Kia said in statement it "denied the allegations but agreed to settle the matter to avoid a protracted dispute with the government". It added it has agreed "to restructure and transfer the departments responsible for recall determinations to the United States".

In August 2014, Hyundai agreed to pay a $17.35 million fine to settle an NHTSA investigation that it delayed the recall of 43,500 Genesis cars to fix a brake defect linked to two injuries. NHTSA said in 2014 Hyundai "must change the way they deal with safety-related defects".

Kia agreed to create a new U.S. safety office headed by a chief safety officer and each automaker will retain an independent, third-party auditor who will directly report to NHTSA and will conduct a comprehensive review of the company’s safety practices.

Hyundai's consent order will last three years, while Kia's is for two years, but both can be extended by one year.

The settlements are separate from ongoing NHTSA investigations into non-crash fires in certain Hyundai and Kia vehicles, some of which have the recalled engines.

In 2019, Reuters reported a group of U.S. states were investigating Hyundai and Kia for potential unfair and deceptive acts related to reports of hundreds of vehicle fires.

In November 2018, Reuters reported that federal prosecutors had launched a criminal investigation into Hyundai and Kia to determine if vehicle recalls linked to engine defects had been conducted properly.

In 2014, Hyundai and Kia agreed to pay $350 million in penalties to the U.S. government for overstating fuel economy ratings, which were billed at the time as the largest ever under the Clean Air Act.