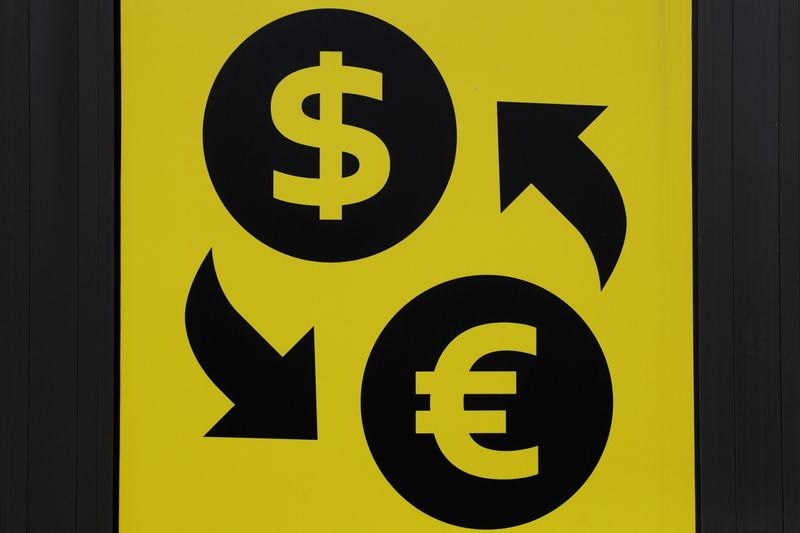 © Reuters. FILE PHOTO: Currency signs of the U.S. dollar and Euro are seen at a currency exchange office in Kiev 2/2

By Abhinav Ramnarayan and Lawrence White

Supply chain financing, by which companies can get cash from banks and funds to pay their suppliers without using working capital, has likely hit a record high in 2020, data shows.

The world's top banks are set to earn $27 billion from financing supply chains this year, data from research firm Coalition shows, as larger borrowers, mostly in Europe, scramble to help suppliers hammered by the pandemic.

This represents a rise of about 5.5% in 2020, compared with an average 2% increase in the previous four years.

"Supply chain financing is the latest financial engineering that could have serious consequences for working capital," said Pierre Verle, head of credit and a portfolio manager at French asset manager Carmignac.

"I am not sure many investors realise how serious it is."

An essential source of credit in a crisis, supply chain finance, also known as reverse factoring, can mask the true level of debt and cashflow issues that companies may face because it does not appear on balance sheets as debt, investors and analysts said.

It is counted as a trade payable for the purchaser and a receivable for the supplier, despite acting more like bank debt in the opinion of some ratings agencies and industry experts.

In a typical example of supply chain financing, a company such as a supermarket chain, concerned about the health of its small food suppliers during a temporary shock such as the pandemic, approaches its bank.

The small suppliers issue invoices to the supermarket, which confirms to the bank they are valid, and then those suppliers get the money right away rather than having to wait perhaps 30 days or even months to be paid by the retailer.

In some cases this acceleration in cashflow can mean survival for a supplier, with the funding also far cheaper because it is usually repaid within weeks rather than months.

Meanwhile, the bank makes some money on the loan.

"This product has been very popular during the COVID-19 pandemic, because it provides working capital for companies experiencing a temporary demand shock," Eric Li, research director at Coalition, told Reuters.

There is no official data on supply chain financing, but earnings from banks offer some insight. Lenders are a key source of such funding although it represents a small portion of their overall trade finance business.

Investment funds, not covered by the same sort of capital requirements as banks, are also increasingly providing supply chain finance but there is less visibility on their exposures.

"This year has battle tested supply chain finance as a new asset class and as a means of getting capital down into the real economy where it is needed the most," the spokesperson said.

Companies are not required to disclose use of the technique, and the International Monetary Fund in June 2019 said the lack of available data on trade finance has been recognised as a problem since the 2008 financial crisis.

"There are plenty of examples of companies with hidden debt, and those are often the ones that cause more problems," said Justin Jewell, a portfolio manager at Bluebay Asset Management.

NMC Health is the most recent high-profile corporate casualty that used supply chain finance. Some of this only came to light when short seller Muddy Waters (NYSE:WAT) put out a note detailing its hidden debt levels.

Moody's said this hid the true debt owed to banks providing the financing.

Accounting firms, ratings agencies and regulators in the U.S. and Europe have called for greater disclosure.

However, regulators and professional accounting bodies have not implemented any major rule changes.