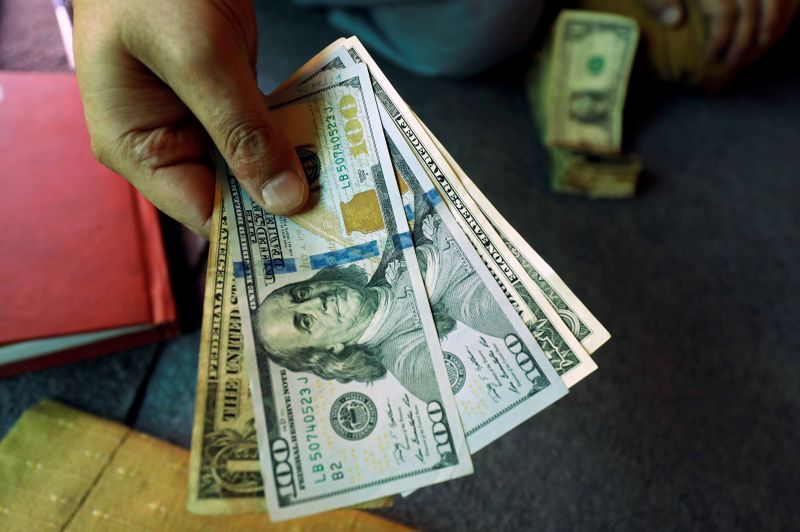 BENGALURU (Reuters) – The dollar's weakening is likely to last at least another six months as investors continue to shift to risky assets and higher returns, a Reuters poll of currency strategists found.

Following a stocks rally in November, the dollar – which thrives in a risk-off environment – weakened around 3.0% last month and is down almost 6% this year, putting the currency en route for its worst yearly performance since 2017.

Despite around 14 million people infected in the U.S. by the coronavirus, hopes for fresh fiscal stimulus and a vaccine will keep global stocks well bid and the dollar weak over the medium term.

The Federal Reserve is expected to give markets a better steer soon on how long it will continue to buy bonds to provide support to the U.S. economy, which could hurt the dollar.

Over two-thirds of analysts – 51 of 72 – who answered a separate question expected the downward dollar trend to last at least until mid-2021. The remaining 21 said it would reverse before that.

Those results match findings from a November global stocks poll where a majority of analysts said the current equity bull run would continue for six months or more.

"You can't have such an over-valued dollar, it's as simple as that. The dollar had become and still is significantly over-valued on pretty much any measure that I can think of as a result of monetary policy divergence, and convergence takes away all reasons for that," said Kit Juckes, head of FX strategy at Societe Generale (OTC:SCGLY).

"The market reacting to that monetary policy adjustment is accelerating because that seems to bring reasons to look for better investment opportunities abroad."

Despite the dim outlook, the dollar's role in the global payments system will limit the currency from slipping too much. Most currencies that strengthened significantly against the dollar in 2020 were not expected to repeat their performances next year.

The euro, which has risen over 8% this year, is forecast to give up some of its gains and trade around $1.20 over the next three months. The currency was trading around $1.21 on Thursday.

"There's a lot of good news in the price right now. Markets, with respect to the vaccine news, have behaved as if we're already there, but the reality is that we've got a quarter or two of really nasty economic news before we get there," said Jane Foley, head of FX strategy at Rabobank.

"With so much good news in the price, I think perhaps there is the possibility we will see a little bit of a retrenchment. I'm not looking for the euro to totally fade away but I do think there is a possibility we have some sort of pullback in the euro in the next few months."

The euro was forecast to gain nearly 2% in a year to trade at $1.23, the highest 12-month prediction in nearly two and a half years.

Emerging-market currencies have taken a beating this year, but saw a turnaround in November as foreign investors returned, a trend expected to help those currencies post some gains against the dollar over the next 12 months.

"We knew all the issues of dollar weakness, we just didn't see any currencies that looked attractive. But right now, with the rebound in China and the pick-up in commodity prices, all of a sudden there are places to put your money," said Steve Englander, head of global G10 FX research at Standard Chartered (OTC:SCBFF).

(For other stories from the December Reuters foreign exchange poll: