We've been bullish on Tesla (NASDAQ:TSLA) since August. And even in September, when the stock headed dramatically lower, we continued to maintain our positive call.

But now, we think the electric carmakers shares are headed for a profit-taking correction.

TV personality and host of Mad Money, Jim Cramer, argues that young investors believe in Elon Musk. Tesla's founder and CEO has been designated the new “Steve Jobs,” by these investors, who appear to be willing to buy TSLA shares at any price.

Young investors, apparently, are also largely responsible for the stock's massive rally since March. Indeed, Cramer has gone as far as saying that perhaps we should start taking advice from these young, largely amateur investors rather than from investment professionals.

Of course, the professionals have turned rather bearish on the Palo Alto, California-based electric vehicle manufacturer. JPMorgan recently wrote about Tesla, it's “not only overvalued, but dramatically so.”

The investment bank argues the “buy-the-rumor, sell-the-dip” scenario for the company’s inclusion on the S&P 500 on Dec. 21 is still in effect. The bank asserts that after the stock spiked 660% this year, it's time for the high-flying shares to come back to earth. Indeed, JPM guidance expects a retracement of 86%, which would take the stock back to $90—rather more of a crash landing than a gentle leg lower.

Though we agree the stock's current price is too high, we don’t anticipate it will fall below $400, for now. Of course, if there's an overall market collapse because of current geopolitical headwinds, Tesla will almost certainly be dragged down as well.

So, why do we expect that Tesla might fall to the $400 level? 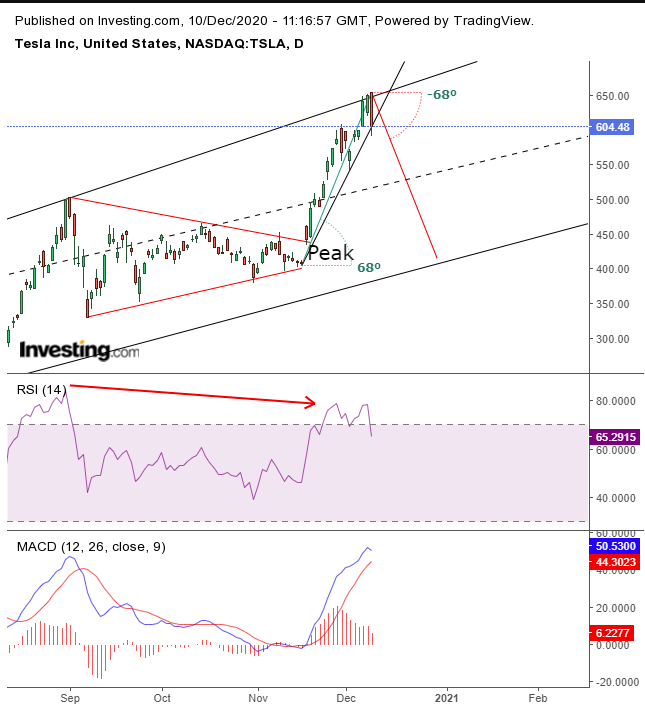 After Tesla bulls absorbed all available supply within a symmetrical triangle, they upped their bids above the range, looking additional supply. As predicted, this set in motion a chain reaction to a continuous advance.

However, by winding up positions within the triangle the implied target has now been achieved. With the price having found resistance at the top of a rising channel—in the form of a powerful Bearish Engulfing Pattern created when the price on Wednesday opened higher but closed below Monday’s price action, demonstrating full-on bearish retaliation—which has already been stretched out by the triangle, we feel it's time for a pullback.

The RSI double-topped, after providing a negative divergence, and the MACD is topping out.

Such a take-profit correction could push the price back toward the bottom of the rising channel, where the scale has been shifting toward demand. If the price falls at the same rate at which it climbed, that 68-degree angle would meet with the channel bottom at above $400, which just so happens to be around where the triangle’s apex is situated.

Traders who remember the stock's recent $250 surge in as little as about 3 weeks will presumably buy into the dip at that point.

Conservative traders should wait for the price to make a complete landing at the bottom of the channel, which includes staying there and waiting for another takeoff, before risking their hard-earned money.

Moderate traders would be content with evidence of accumulation even if the price didn’t return all the way to the channel’s demand-line, or if it did return all the way, they may buy the dip, without waiting for confirmation of support.

Aggressive traders are likely to short now, in order to capture quick, hard gains within the correction. However, considering this position goes against the prevailing trend, commitment to a tight money management plan is critical.