Recent headlines about Facebook (NASDAQ:FB), such as Bloomberg's "Facebook Breakup Would Demolish Zuckerberg's Social Media Empire," don't augur well for the tech giant or its stock. Last week, the US Federal Trade Commission, (FTC), filed an antitrust lawsuit against Facebook, "accusing it of abusing its monopoly powers in social networking to stifle competition." A coalition of US states are also part of the suit.

If the social media behemoth loses, it will have to divest itself of such assets as Instagram and WhatsApp among other things, which could cause massive damage to revenues as well as ratchet up expenses in order to dismantle the company's integrated platforms and restructure its network.

With news this dire, one would assume traders and investors are fleeing the sinking ship, dumping shares of the Menlo Park, California-based company as rapidly as possible. However, that's not been the case. Rather, the stock continues to retain its value.

Facebook is down less than 7% since its Aug. 26 record high, but it’s also nearly 60% higher since a first antitrust probe took place in June 2019.

There's a technical axiom that notes if prices don’t fall on bad news, then sentiment is very bullish. This could mean a number of things in practice:

Whatever the fundamental case, we're taking our cues right now from the balance of supply and demand, which seems to be pointing higher. 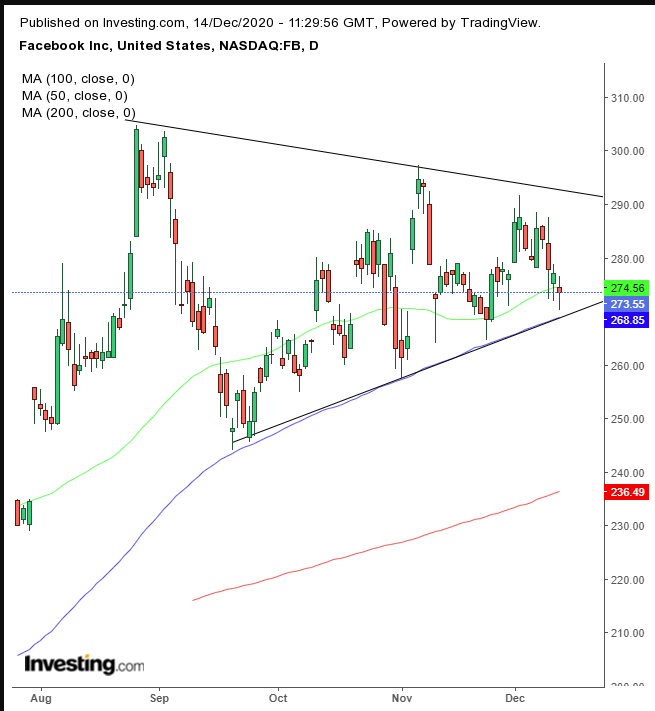 While the stock fell for four straight days, it found support by the bottom of a symmetrical triangle, reinforced by the 100 DMA. During the past three days, the price action formed long lower shadows, demonstrating that dip buying had occurred.

A symmetrical triangle occurs when both buyers and sellers increase their positions, which is why it's symmetrical. As a rule, it has a bias to break in the direction of the underlying trend, which for FB has been moving upward.

The reason the breakout signals a resumption in its previous direction is that a chain reaction has been set up as traders unwind losing positions and trigger winning positions in the direction of the breakout. That's what sets up another leg in that direction.

It's not a given, however, that the breakout will be in the direction of the underlying uptrend, but the price’s proximity to the trendline certainly provides a most attractive risk-reward ratio should it occur.

Conservative traders would wait for an upside breakout to enter a long position.

Moderate traders may prefer to receive confirmation via a solid green candle, which would close above the 50 DMA to demonstrate accumulation.

Aggressive traders may jump in at will, provided they work out a plan they’ll stick to.