Skip to content
Home
Stock Analysis
Can Impatience Be A Virtue? Market Slumps With Stimulus Talks Still On Simmer
Stock Analysis
New Era Of Conscious LivingDecember 9, 2020 at 6:06 am
24 Views
0
54321
0 (0 votes)

The waiting game that began last week continues, putting the long rally on pause. We’re an impatient lot, and when things aren’t happening quickly, the market sometimes slumps, as we’ve seen so far this week.

The main thing investors are waiting for is any sign of Congress taking action on a stimulus, the same old thing we’ve been tapping our fingers about for months even though it’s tough to get anything done in a lame-duck session. The difference now is that with earnings season basically over and the election in the rear-view mirror, there’s less corporate news for people to focus on. That puts geopolitics in the driver’s seat, which can make things unpredictable.

When life grows uncertain, volatility tends to come back into play. The CBOE Volatility Index is up this morning, along with bonds and gold, which has been on a turnaround move higher over the last few days after reaching multi-month lows in late November. Crude also had been gaining momentum and there was talk it might hit $50 a barrel, but now it’s struggling a bit.

Looking at these developments, it backs up the idea that a little “risk-off” sentiment is creeping in after most of the risk measures stepped back during November. The good thing is that the 10-year yield continues to hang around near 0.93%, not losing too much ground. Higher yields are often a sign that investors feel positive about the economy.

The early stock market softness isn’t really that big a deal. The pattern over the last few days is to sell off early, hit some lows, and then move higher into the close. We’ll see if that continues today.

The backdrop to all this is the continued sad toll of COVID-19, where U.S. caseloads remain at record levels and state shutdowns threaten to stall some of the progress made over the summer with reopening. Yesterday saw that reflected in the market as a few of the “mega-cap” tech and communications firms resumed their leadership role while cyclicals that tend to do better when the economy firms up retreated a bit. Consider keeping an eye on this relationship again today and check whether some of the major “stay-at-home” names that had been flagging come out of the woodwork.

The data calendar looks a bit light today, but gets more interesting later this week when monthly consumer and producer prices come out. Tomorrow we’ll discuss what analysts expect those reports to bring. Here’s a hint for you veterans: It doesn’t look like a repeat of 1979.

We’ve talked a lot about a possible U.S. stimulus, and that definitely remains front and center. What’s gotten less attention is the chance of a European stimulus. The European Central Bank (ECB) meets Thursday, and news reports say it’s likely to add emergency monetary aid on top of what it’s already done this year in response to the pandemic.

Considering Congress has to agree by Friday to keep the government open—and that a stimulus might get pulled into any legislation—it’s possible by the end of the week we could have a double-whammy in terms of good news. That means you can’t rule out a quick move up for the market. However, if either the U.S. or Europe can’t get stimulus done for one reason or another, that could be viewed very negatively overall.

A U.S. stimulus—if it comes—could even renew the bond selling seen last week and maybe give the 10-year yield a chance to climb above that elusive 1%. While it’s possible this could cause some hand-wringing in the stock market, the way higher rates often do, the Fed has been very clear it plans to keep its powder dry. It’s also said it would let inflation climb above 2% if necessary to support job growth, and so far inflation’s been a no-show (new inflation data bow later this week).

Vaccine Approval Could Provide Another Tailwind

Besides the ECB and Congress, consider looking out this week for possible U.S. Food and Drug Administration (FDA) approval of a COVID-19 vaccine. Some good news came this morning with the media reporting that Pfizer's (NYSE:PFE) vaccine safety data didn’t raise any concerns with U.S. regulators. Arguably, the vaccine optimism has already been built into the market quite a bit, but you can’t rule out some more money coming in from the sidelines when or if the approval news hits.

News reports earlier today said the first person was vaccinated in the U.K., which is great to hear. However, it doesn’t mean everything immediately changes, considering the logistical challenges of getting hundreds of millions of people vaccinated in the U.S. If you think back to last March when the virus began, Europe was about three to four weeks ahead, so maybe that will be the case with vaccinations, too.

There’s been a pretty steady flow of money into stocks over the last few weeks, analysts say, and the NASDAQ Composite hit another new high Monday despite the other indices falling. How much of the good news is built in may be hard to quantify, but more cash could still be out there.

Meanwhile, Treasuries aren’t giving stocks a lot of competition right now in terms of yield, and corporate bond yields remain historically low. That’s positive for companies borrowing money, but maybe not too enticing for many investors.

Speaking of companies and money, high-flying shares of Tesla (NASDAQ:TSLA) came under pressure this morning after it said it would sell shares worth $5 billion. The pressure wasn’t that much, however, maybe because people seem to have a tremendous appetite for this stock. As for TSLA’s decision to sell shares, it probably reflects the company deciding to play its hand while it’s hot. 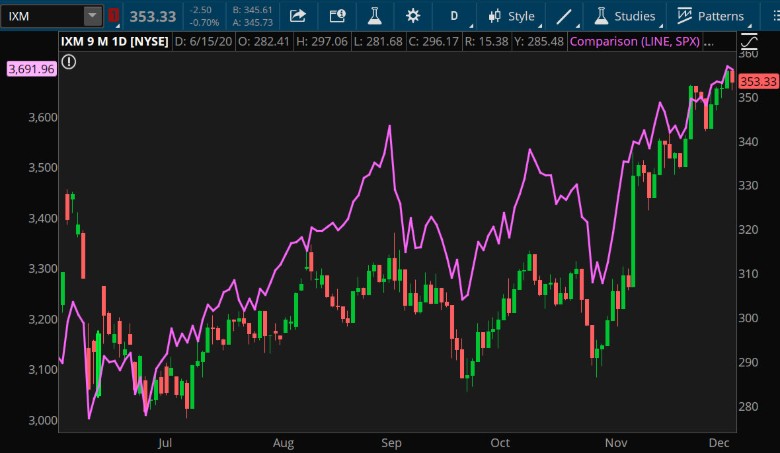 CHART OF THE DAY: FINANCIALS AND THE BROADER MARKET. After lagging the broader S&P 500 Index (SPX – purple line) for most of the year, the Financials sector (IXM – candlestick) surged this fall. But IXM has underperformed in recent days, with a few big banks among those net-sold by TD Ameritrade (NASDAQ:AMTD) clients last month (see more below). Financials might be seeing a bit of profit-taking after a strong post-election period, but it’s also possible that some investors are eyeing another round of financial regulation in the near future. Data source: S&P Dow Jones Indices. Chart source: The thinkorswim® platform from TD Ameritrade. For illustrative purposes only. Past performance does not guarantee future results.

Pressure Cooker: Don’t be surprised if Monday’s softness extends in the final weeks of the year, not just due to COVID-19. Some of the pressure—particularly on the financial sector—could reflect growing tax worries ahead of 2021 and new administration in Washington. There may be some nervousness about new regulations, because let’s face it, when new regulations come in, Financials are often some of the first ones hit.

The other pressure point is worries about any change in the tax regime, assuming the new administration proposes them and they can get through Congress (the Jan. 5 Georgia Senate election could be the wild card here). Either way, some investors might decide not to take chances and lock in gains at this year’s tax rate instead of rolling them into 2021.

Investor-Eye View: November’s Investor Movement Index® (IMXSM)—TD Ameritrade’s proprietary, behavior-based index to measure what investors actually were doing and how they were positioned in the market—fell to 5.41, down 4.92% from its October score of 5.69. Although the markets rallied for most of November, many TD Ameritrade clients appeared to use this as a time to take profits and reassess their market views heading into the last month of 2020.

Among the most popular stocks that month, at least with TD Ameritrade clients, were Pfizer, Alibaba (NYSE:BABA), DraftKings (NASDAQ:DKNG) and Amazon (NASDAQ:AMZN). Some of the stocks seeing the most selling, according to IMX, were Bank of America (NYSE:BAC), JP Morgan (NYSE:JPM), Disney (NYSE:DIS) and Micron (NASDAQ:MU).

Looking at the “green” side of the list, PFE probably speaks for itself, because it revealed positive vaccine results in November. Vaccine maker Moderna (NASDAQ:MRNA) was also in the top-10. BABA and AMZN’s popularity might speak to investors positioning themselves for possible popularity of online sales during the holidays, while DKNG might reflect excitement around college football and the approaching NBA season.

Banks might have lost some popularity due to investors not believing interest rates would climb much higher, or from worries about new regulations in 2021. Some of the weakness in MU might have reflected profit-taking as the end of the year approached. Selling of DIS and Starbucks (NASDAQ:SBUX) might show nervousness on the logistics and timeline of a vaccine. Also, all the shutdowns could be making people wary of a trip to Disneyland or lounging at SBUX with a laptop.

Something to Consider: This was the first time since February when investors tracked by TD Ameritrade lowered their exposure to stocks. You don’t necessarily want to project too much from this, but we all know what happened in March. Not that anyone expects another steep drop ahead, but it does seem like investors might be locking in some gains after what’s been an amazing year. Who would have thought back in March that the market would be setting new record highs by now, even with quarantines still in place?

What’s also great is seeing how so many new participants got into the stock market this year. As bad as the pandemic was, it did give people more time to get educated and to trade and use the platforms. That could be one of the legacies of 2020.

Disclaimer: TD Ameritrade® commentary for educational purposes only. Member SIPC. Options involve risks and are not suitable for all investors. Please read Characteristics and Risks of Standardized Options.